(Delaware County, PA) – Wawa, in partnership with 2SP Brewing Company, is thrilled to announce the return of 2018’s collaboration, Winter Reserve Coffee Stout. Also, on tap for 2019 is an expansion including a bourbon barrel finished version of the beer, as well as two freshly brewed partnerships with Hardywood Park Craft Brewery in Richmond, VA and Coppertail Brewing Company in Tampa, FL. 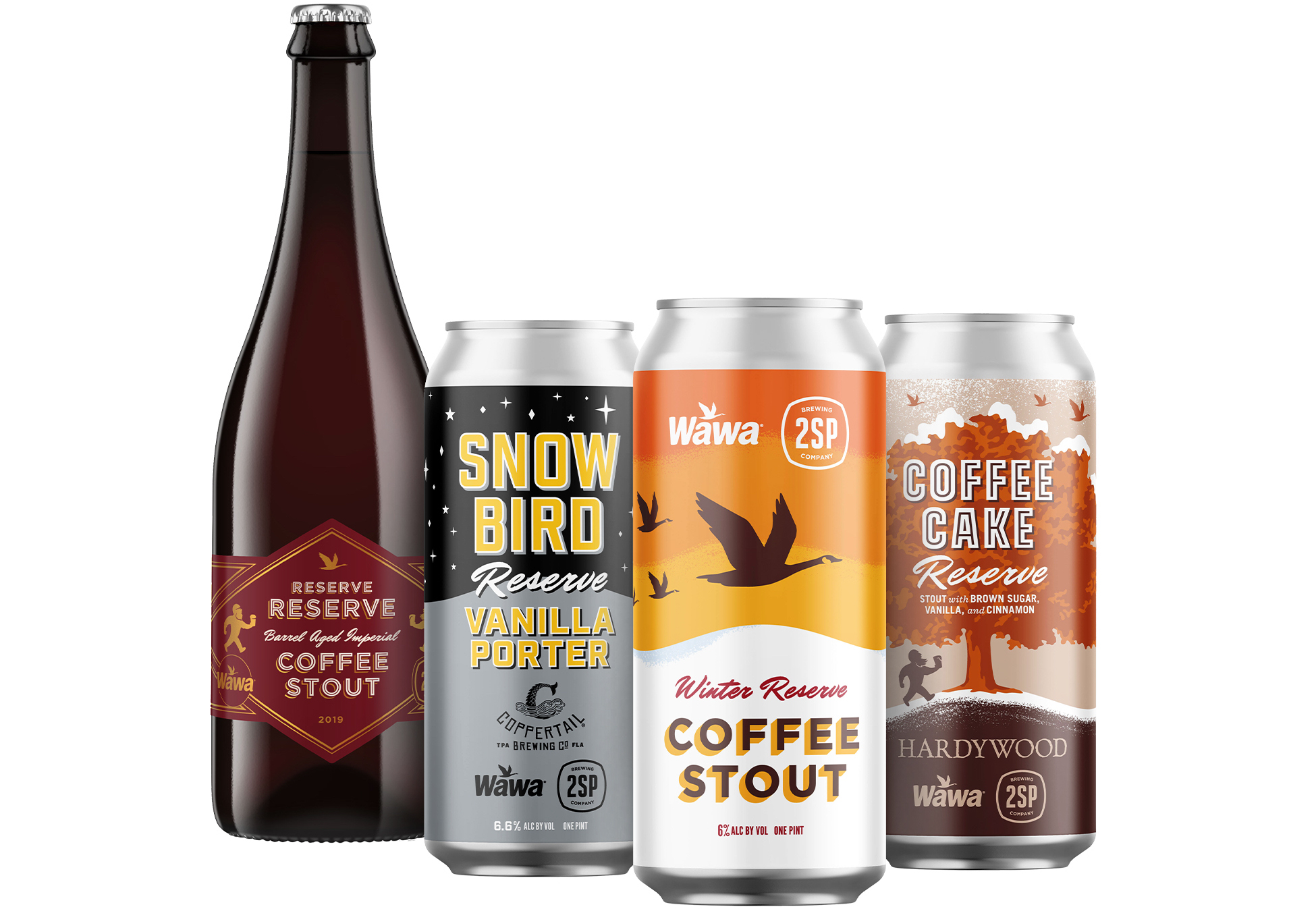 Delco partners Bob Barrar, Head Brewer, 2SP Brewing Company and Michael McLaughlin, Wawa’s Concept Development Manager and World Traveling Coffee Guru teamed up last year to bring their hometown a beer that locals would be proud of and due to an overwhelming response, the duo has done it again, but this time have invited fellow brewers in other markets to join in on the fun.

Winter Reserve Coffee Stout, as well as 2019’s new additions, Reserve Reserve, Coffee Cake Reserve Stout, and Snowbird Reserve Vanilla Porter, all feature Wawa Winter Reserve Coffee as the primary ingredient. Each brewery created its own special recipe and attended a collaborative brew day with McLaughlin at 2SP Brewing Company, the official brewery partner. The beer will launch with a multi-state “Brew Tour” that will kick off Friday, December 6 in Chadds Ford, PA., and culminate on Thursday, February 20, 2020 in Tampa, FL. Beer and Wawa lovers alike are encouraged to attend one or all of the events below to experience a live firkin-tapping, complimentary samples of the specialty brews, while supplies last, and more. The First 100 customers through the door at each event will also receive the first-ever, official Brew Tour T-Shirt.

“At Wawa, supporting our local neighbors is at the heart of everything we do, which makes our special partnership with 2SP Brewing Company so important to us, as well as their shared values and desire to invite other breweries to collaborate in other areas that our stores serve. We couldn’t have asked for better partners in working with 2SP, Hardywood and Coppertail, as they have all brought their unique talents to the table and we all can’t wait for our communities to experience these recipes that are sure to please your palate and complement any family party, special event and casual gathering with friends,” said Mike Sherlock, Chief Product Marketing Officer, Wawa, Inc.

The specialty beers and tasting notes are as follows:

o An English Style Imperial Oatmeal Stout aged in Weller Bourbon Barrels for 9 months. This big stout is silky smooth with a lot of influence from the bourbon barrel and the addition of Wawa Winter Reserve Coffee. Expect robust flavors of vanilla, chocolate, and bourbon, all balanced out by Wawa’s exclusive blend of reserve coffee. ABV 10%

o Brewed for our Florida friends who enjoy a sweet cup of Cuban Coffee, Snowbird Reserve is a robust porter with sweetness derived from malted barley, intensified by Wawa Winter Reserve Coffee and balanced by a hint of vanilla. ABV 6%

“The only thing better than brewing another batch of Winter Reserve Coffee Stout with our neighbors, Wawa, was working with our friends at Hardywood and Coppertail to bring more beers to more markets” said Bob Barrar, Head Brewer. “Fans can expect the Winter Reserve oatmeal stout to have the same balanced sweetness that showcases the full range of flavors from the Wawa Reserve Blend with an added velvety mouthfeel. This will be enhanced with vanilla and caramel notes after aging it in bourbon barrels for 9 months with this year’s addition of the Reserve Reserve, a Winter Reserve Bourbon Barrel aged coffee stout.”

The Winter Reserve and Reserve Reserve will be made available for purchase at two Wawa locations, Chadds Ford and the soon to be opened Middletown Twp., with a restricted quantity count per customer, based on first-come, first- serve basis. The two beers will also be available at select beer retailers in Southeastern Pennsylvania, New Jersey, and Delaware. The Coffee Cake Reserve will be released at Hardywood Park Craft Brewery and will be sold at Wawa stores across the Richmond metro area while supplies last. And finally, Snowbird Reserve will be made available in February and is for Wawa stores in Florida.

“Collaborating with our neighbors at Wawa in 2018 was a truly special experience and we are beyond thrilled to be bringing the collaboration back for its second year– but in a bigger, better, and more bad a** way” said Michael Contreras, Director of Sales & Marketing for 2SP Brewing Company. “Our friends at Hardywood and Coppertail are almost bigger fans of Wawa than we are and have been long time friends of ours. It didn’t take a rocket scientist to see something special was brewing the second we got those beer nerds in a room with Wawa’s Coffee Guru, Michael Mclaughlin.” 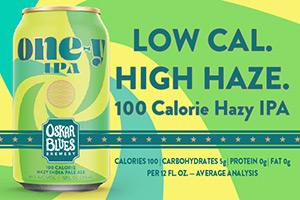 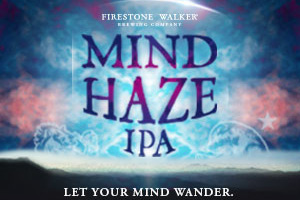 Wawa, Inc., a privately held company, began in 1803 as an iron foundry in New Jersey. Toward the end of the 19th Century, owner George Wood took an interest in dairy farming and the family began a small processing plant in Wawa, PA in 1902. The milk business was a huge success, due to its quality, cleanliness and “certified” process. As home delivery of milk declined in the early 1960s, Grahame Wood, George’s grandson, opened the first Wawa Food Market in 1964 as an outlet for dairy products. Today, Wawa is your all day, every day stop for freshly prepared foods, beverages, coffee, fuel services and surcharge-free ATMs. A chain of more than 860 convenience retail stores (over 600 offering fuel), Wawa stores are located in Pennsylvania, New Jersey, Delaware, Maryland, Virginia, Florida and Washington, D.C. The stores offer a large fresh foodservice selection, including Wawa brands such as custom prepared hoagies, freshly-brewed coffee, hot breakfast sandwiches, specialty beverages and an assortment of soups, sides and snacks.

True to style: that’s Delaware County and that’s 2SP. In 2015 Bob Barrar, one of the most awarded brewers in the country, got together with a few unemployables and opened a brewery in Delco. Their goal was to get Bob’s beers into the hands and lips of drinkers across the region. Now in their fourth year, they have been able to keep the lights on and get 2SP onto tap-lines and beer shelves across Southeastern Pennsylvania, Delaware, New Jersey, New York, and…Japan!

2408 – 2410 Ownby Lane, Richmond, VA 23220 Hardywood officially began its mission to brew with purpose in late 2011 as one of only two craft breweries in the city of Richmond. Shortly thereafter, we were honored to host the signing of SB 604, which allowed craft breweries to sell beer from their taprooms directly to consumers and paved the way for Richmond to earn its place as one of the top craft beer destinations in the world. Our original brewhouse and taproom was a vacant warehouse discovered in a long-forgotten neighborhood known nearly a century prior as Richmond’s German Brewing District. Hardywood has been drawing new life to this forgotten area one draft pour at a time. We now operate a 20-barrel brewhouse and taproom in the original location, as well as a 3.5-barrel pilot brewery and taproom in Charlottesville, VA, and a 60- barrel brewhouse and destination brewery in the West Creek area of Richmond, right on the border of Goochland County. Today, Hardywood continues to develop and deliver on its mission with a sharp focus on brewing quality, sourcing local, environmental stewardship, community engagement, and giving back.

2601 E. 2nd Avenue, Tampa, Florida 33605 Coppertail was the dream of Kent Bailey, who was a homebrewer and unhappy attorney practicing business law in Tampa. He wanted to make a career change and felt he could be successful brewing beer in larger quantities than he could in his kitchen. He knew he needed the help of a professional brewer. In 2013, while in an online beer brewer’s chat room, he met Brewmaster Casey Hughes. He invited Casey and his newly-wed wife to meet him in Tampa. They shook hands after their first meeting and a partnership was born.

Kent acquired access to Coppertail’s site at the corner of 2nd St. and Adamo drive in 2013. The original building was built in 1908 as a Hellman’s Mayonnaise factory. It was used for production by the Sevilla Olive company in 1920, as a refrigeration repair shop and other uses over time.

Coppertail Brewing Co. was named after an imaginary sea monster who lives in Tampa Bay. The creature was the vision of Kent Bailey’s daughter, Sofia, when she was age 5.

By clicking enter you are verifying that you are old enough to consume alcohol.

Your cart is currently empty.